What Men Mean When They Compliment Women

Today’s post begins with something amusing I experienced recently. I was hanging out with a woman when I looked at her and sincerely told her, “You know, I think you look really sexy today.”

She was immediately flustered and replied, “Well, I’m not, though. I’ve got this thing going on with my left eye, and my hair isn’t quite how it should to be. And I feel about five pounds fatter today, for some reason.”

I thought it was amusing until I started to think about how many times I’ve given women a compliment, only to hear her come back with the excuse, “but I’m really not.”

When someone gives you a compliment, just go with it. Go with the good feelings it brings up, and go with the vulnerability that goes along with it.

Because the moment you disagree with what the person said, you’re really saying to the person, “I ’m not able to take compliments when I really should.”

Compliments are beautiful. But when we receive one, human nature usually kicks in, making us feel like we need to defend ourselves against it, instead of just accepting it and saying “thank you.” We feel like we have to rationalize it, or disagree with it, or to say that we really aren’t that just now.

When someone says to you, “You know, you look absolutely stunning. Yes, that’s right, you. You are stunning and beautiful,” instead of replying, “No, not little old me,” look back at the person and tell them, “Thank you.” Because when men compliment women, it’s their way of becoming more vulnerable with women. When he says you’re beautiful, he’s opening up to you.

What He Really Means 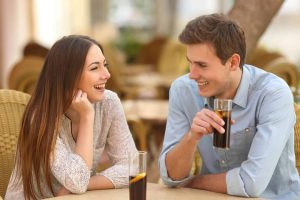 For most men, it isn’t easy to give a woman a compliment. As a matter of fact, most men are challenged at giving compliments.

In my life coaching lessons with men, there’s a compliments session we do. I actually send guys out to give compliments—real, authentic compliments—to women they randomly meet out on the street. The guys go out and give a compliment to the first woman they see. This helps them learn how to get over their hang-ups. It can be a difficult challenge.

So when a man says to you from his heart, “You’re beautiful,” accept it. Because he’s trying to get closer to you. He’s trying to show you a side of him, a real side, a vulnerable side. Yes, that side you desire and crave. The side you really want him to show you.

But every time you reject compliments and shoot him down, he’s left to think to himself, “Well, that’s okay. I just won’t give her any more compliments. I won’t go down that road at all anymore. I’ll just talk to her about the weather and other mundane things.”

Understanding the True Meaning of Compliments

The real meaning behind men’s compliments is that he’s trying to get closer to you. He’s trying to be more open with you, and he’s trying to open you up, so you can go somewhere new and different together, just the two of you. He isn’t looking to receive a compliment in return (though that can help sometimes!). Don’t say something back unless you mean it.

We’re always trying to find ways to express how we feel, and this is one way for a men to do that. Men feel things on a visual level first, before they feel things on an emotional level. He’s complimenting you to try to get in touch with you. He wants to get closer to you.

Let’s say you’ve been dating a man. You’ve known him for a while, you’ve been hanging out together, getting to know each other better. And every time he sees you after you’ve been apart for a bit, he looks at you and says, “You’re so hot!” or “You’re so sexy!” or “You look amazing!” or “You smell so good!” means that he likes you, and he’s starting to tell you that with his own words.

Because if he tells you you’re hot every single time you see him again, it means you’re truly getting hotter to him. He’s beginning to think, “Maybe I should spend more time with this girl. Maybe I really like her. Maybe I want to be with this girl long-term. Maybe we can have a future together.” That’s what men are doing when they begin to open up. They open up at the physical level first.

Just a side note: this has nothing to do with a compliment from some random guy you’ve never seen or met before. This is all about the man you’ve been dating for a while now, who you’ve been seeing a bit, and you’ve both realized that you like each other.

He’s making the effort to open up to you. He’s showing you a different side of himself, trying to go to a deeper level in a conversation. He’s trying to get to know you in a deeper way.

I hope you found this helpful! Let me know in the comments section.